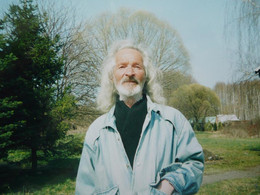 "In the beginning was the Light."

"Light. Who does know its nature? We can see it every day and we take no notice of it. This is norm. But just imagine that there is no light on Earth. Well? It's the end of life. So, light is the basis of all. Many artists have attempted to reproduce of light in art. Light and shade. There are more shade, there are more light. It's principle of work of all artists. Except of Valentin Massov. The artist Valentin Massov makes light without shade. It's light from light. As Oleg Tselkov said:"You make what nobody has made yet, everything that is left by the art on the Earth..." Valentin Massov was born in Ulyanovsk Region in 1937. His father Paul Massov, who died at the front in 1942, was the mysterious person. He was a doctor. Nobody knew Where he came from. He was an exelent doctor and everybody loved him. He was a tall and a handsome man. His image is as if dissolved in sad mist of memory of Valentin Massov, getting the features of forefather of humanity, a certain Savaof God, wise philosopher and leader. His mother Catherine Massov who died in 1939 was believer woman. In his memory she will forever remain as guardian angel, angel of peace, love and life. Massov has took all the best from his parents and was able to surpass them. He has became the very best in the Art World. What do make us the very best? It's Talent! I am sure, a god of art Apollo was present at birth of Valentin Massov and blessed him. But... if Apollo has gave to him the Talent, when he was born, then The Fates have gave to him difficult and bitter fate. Envy and incomprehension haunted him all his life. Valentin Massov is the Unique. Why is he unique? He has created the new art school. It's the new interpretation of the meaning of art. It's Art as the Way to the God. "It is not painting in its general sense. It is the way to the God," a director Roman Tsurtsumia said in 1980. Valentin Massov's art radically changed the established views on Art. He is not like other artists. His high culture amazes and delights, his artistic career leaves very few people indifferent. A straight deportment, a stately step, an aristocratic hands, a grey beard and grey wavy hair make him the man from XIX century. Wisdom and goodness radiate from his face. His unique perception of the world has gave to him possibility to become the unique artist. He can see light in all - a flower, a tree or a human. And most importantly, he can pass on this light to his paintings. His magical water-colours are woven out of light. Light is not physical substance. Light is energy and a man can not touch it. It is impossible in what way light is transformed into the image on his works. "I am an atomist. And I can feel the energy with my hands. The Bible is begun with the words: "In the beginning was the Word."But I would say:" In the beginning was the Light," and your paintings are the illustration for these words," an academician-atomist said him in 1980. "Many people have tried to fall outside the limits a matter. Mathematicians, poets, musicians have managed to do it. From artists, even Leonardo da Vinchi, couldn't do it and you have done it..," the poet Alexandr Revich said. What is the meaning of art? It's performance for someone, the way to perfection for me. Valentin Massov's art has helped me see the beginning my way. Thanks to my meeting with Mr.Massov, I understood the meaning of life on Earth."

(from the article "Who are you Mr. Massov?" by Olga Romanova)